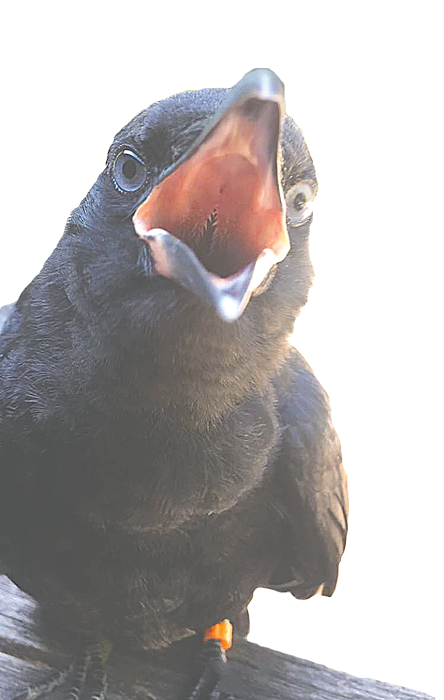 Jim Murphy already had plenty of pets. He wasn’t looking for more. But in the Spring of 2012, he acquired an unusual pet, quite by surprise.

“I was golfing with some friends at Rolling Hills and noticed a curious cat, intently focused on something hidden in a wide open field between two fairways,” he describes. A part-time officer with the Lapeer County sheriff’s department, motor and marine division, Jim’s observation training kicked in. He went to investigate. That’s when he found them: two baby crows, about to be a gourmet feline lunch. No parents in sight. “The crows were so young, they didn’t have feathers yet,” Jim recalls, deciding instantly that he couldn’t just leave them for sure death.

The 29-year Hadley resident brought the bird babies home and learned they were between one week and 10 days old. He also realized they couldn’t feed themselves. Jim researched how to make and administer appropriate nutrition for infant crows, “It was quite a project making the paste; a combination of eggs, dry puppy and cat food, soaked in water to become mushy.”

The crow babies quickly grew bigger and stronger and bonded with Jim because he did most of the frequent feedings with his finger. However, they also developed relationships with Jim’s wife, Theresa, and daughter Shauna. The family named the birds Good Birdie and Bad Birdie because they were both very social and friendly, but had different personalities. “Bad Birdie could get grouchy at times, and only with certain people. So we started calling him bad because of his behavior at times,” says Jim. ”We don’t know what happened to Good Birdie. One day he just never came home.”

Bad Birdie’s first flight was a short distance up to a wooden shelf mounted high on the wall in Jim’s workshop. Soon after, the maturing crow flew out the always-open door to sit in the nearest tree for six hours. Jim is well aware that keeping a wild animal in captivity is against state regulations, and is a big believer in this approach himself, so he was conscious of making doors and windows easy crow exits, allowing Bad Birdie total freedom. He purposely removed the screens from strategic windows in the house so that his pet crow could come and go as he pleased. And pleased Bad Birdie was, to go in and out, back and forth, constantly busy. Jim wondered, “What is he up to? Where is our crow friend going?”

It turned out that Jim’s juvenile crow had started visiting their neighbors. Jim had put leg bands on the baby crows engraved with their telephone number and a lady nearly a mile away called to share her experience. Bad Birdie, true to his name, seemed to be exploring career possibilities as a professional thief as he compulsively stole metal lighters, keys and other shiny objects which he would then deposit on the high shelf in the workshop for safe keeping. Out of sight. Out of reach. From humans.

Jim didn’t realize just what a kleptomaniac Bad Birdie was until it was time to renovate the workshop. He needed to take the shelf off the wall. When Jim climbed up on the ladder he was shocked to discover dozens of stolen treasures that had been stashed up there since Bad Birdie’s delinquent days. 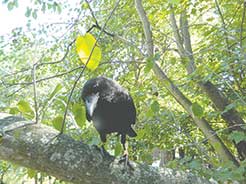 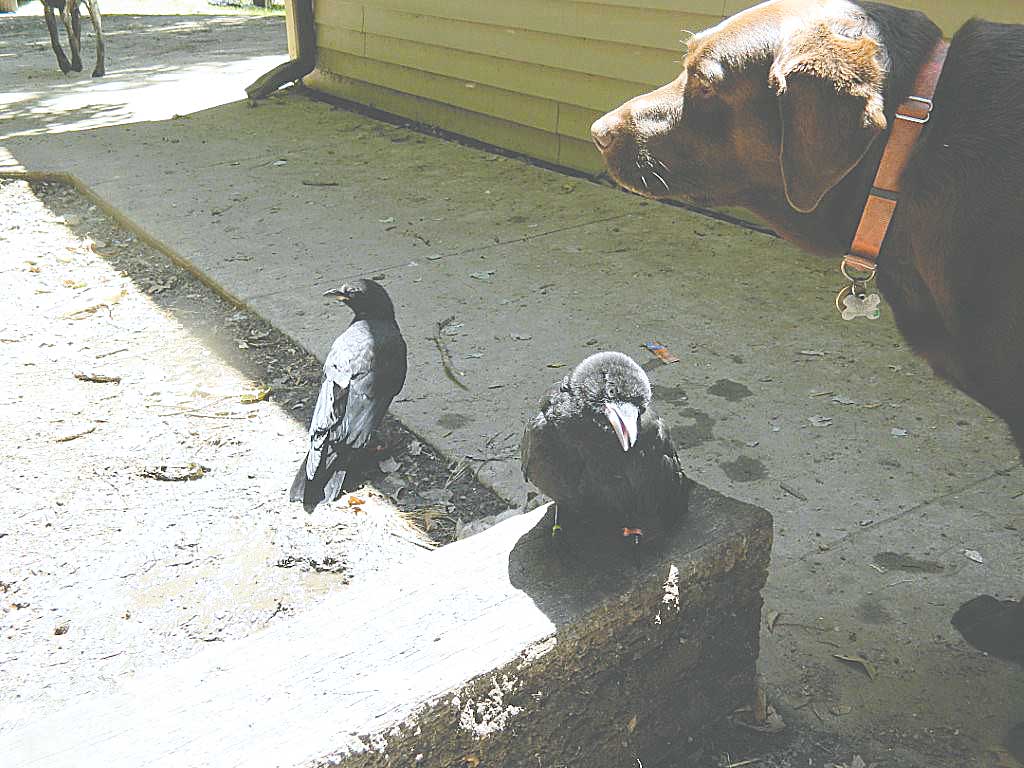 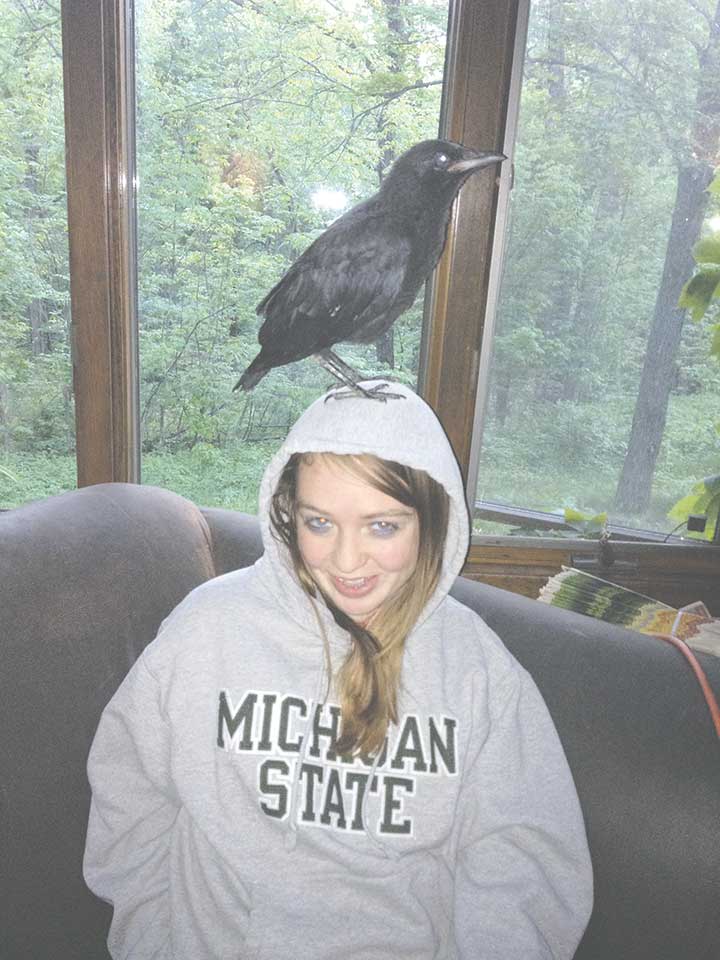 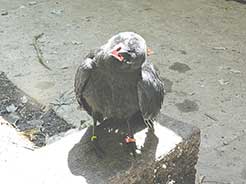 Despite Bad Birdie’s errant ways, he had quickly become part of the family. Every night, one hour before dark, Bad Birdie would fly in through the open bedroom window and sleep comfortably in a basket placed on a flat section at top of the bed’s headboard. “His morning ritual was to wake me up by pouncing on my chest, nuzzle me, and then fly outside,” Jim reminisces fondly, “He never went too far. I could call his name and like a fighter jet with high-tech precision, he would zero in on me, landing on my head.”

In addition to heads of hair, other favorite perches included shoulders, the picnic table, especially when cookies and crackers were on the menu and even the family dogs. The Murphys raised the crow until the end of the first summer. During that pivotal season, Bad Birdie attended Shauna’s graduation open house, with 100 other guests, and was the hit of the party. Throughout the day, he landed on guests’ shoulders and ate hot dogs from their hands.

Every Spring since then, Bad Birdie has returned and, for six weeks or so, hangs out at the family’s rural property, which they affectionately call Murphy’s Happy Farm. A sanctuary for pigs, turkeys, chickens, sheep, geese, cats and dogs, no animal is killed or eaten. The Murphys just enjoy taking care of them. “It all started with Shauna’s involvement in 4H,” Jim relates, “when I spent $600 on food for two sheep and then bought them back at the fair!”

“This year Bad Birdie brought his girlfriend, or boyfriend – we still don’t know what sex they are” Jim explains, “but he’s real leery. He won’t land on our shoulders anymore but he sure lets us know when he’s here.” Their former pet, Bad Birdie lands on the basketball hoop outside the window, and caws and caws until the family comes outside.

In the wild crows are elusive, often used as a symbol of evil in film and television. However, according to Dr. John Marzluff, wildlife biologist, University of Washington, they are highly intelligent birds, recognize faces, communicate information among their peers and also to the next generation. In a nature documentary, “A Murder of Crows” researchers discover crows even have different languages; one for family that is intimate and quiet, the other being the loud and sinister-sounding caw with which we are all familiar. The next time you see a crow, look for the tell-tale leg band with the Hadley phone number.

Planes, Trains and Automobiles with Cats